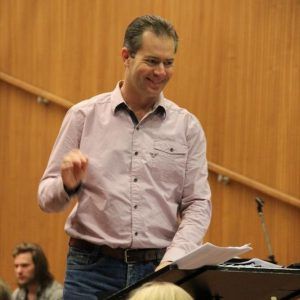 In July 1997 Jan Medendorp and Pieter Nollet thought there could be a place for an university wind orchestra. During its introduction in 1997 they enthusiastically recruited members for the orchestra, with the result of 60 musicians showing up to the first rehearsal! The orchestra was led by Jos de Kleijn and rehearsed in the student church on the Professor van Weliestraat. The working name QHarmony (based on KU-harmonie, related to the Catholic University Nijmegen) became its official name after a few months, even though both the university and municipality preferred the more general name “Keizer Karel Harmonie”, because HAN students and hospital staff were also welcome to join.

In the second season the rehearsals were moved to community center Titus Brandsma, which had the great advantage that we could get a drink after rehearsal. A few committees were created which could take care of choosing the music, organization of concerts, creation of the club magazine Titus (named after the rehearsal location) and the organization of activities. In 1999 there were two exchange concerts with student wind orchestras of Leuven, Eindhoven and Enschede and in 2000 was the first QWeekend. Ever since the QWeekend is a yearly highlight!