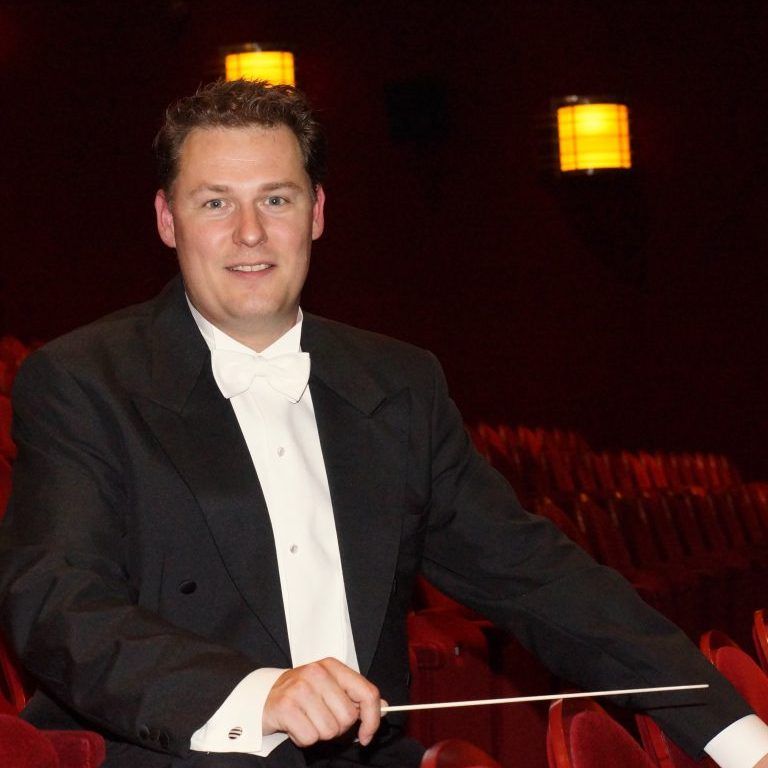 After QHarmony said goodbye to conductor Albert van der Heide, a young conductor and musician stepped forward as his replacement. Maron immediately made himself heard and led the orchestra in the year 2009-2010 to a few musical highlights.

In november 2009 there was an exchange concert with Philharmonie Gelre. This and the concert in Wijchen in January 2010, where the orchestra was invited to play with Muziekkring Wijchen, were a big success. During the two concerts in April, named “Theatre Night: The QExperience”, the orchestra provided a spectacular evening full of movie- and musical music for almost 800 people. This was in part thanks to the singers of 4more and the presentation of comedian Christian Pielich.
In October 2011 there was a collaborative concert with MajEUR, the student orchestra of the Erasmus University in Rotterdam. A few months later on a very cold, snowy day, QHarmony traveled east to collaborate with Studenten wind orchestra Twente (SHOT). Concerts with Percussion group Neerbosch-Oost and Symphonic Windorchestra Nijmegen followed.

The highlight of 2011-2012 was the concert tour to Budapest in July – August 2012. Roughly 50 musicians travelled to the far Hungary, where a few beautiful concerts were given. The locations were special and very divergent, from beautiful churches to tour boats and a real Sissi-castle. In 2012-2013 QHarmony was allowed to blow out fifteen candles on her birthdaycake! Maron conducted among other things the reunion concert, in collaboration with Albert van der Heide, and as cherry on top Maron was the conductor during the anniversary concert in June 2013. The Theater of Nijmegen was the location for this concert, where QHarmony collaborated with the dancers of Flex Dance studio. The audience was very enthusiastic and the orchestra can be proud to have showed something this amazing.
In the year 2013-2014 a lot was planned as well. In November 2013 QHarmony gave another concert with SHOT. This time at home: in Nijmegen. The concert took place in community center Dukenburg, which was fully packed with audience. In 2014 several concerts took place: a concert in collaboration with coverband Thunk!, the yearly NMF-concert and the concert tour to Prague in July-August 2014!

After five years of positive colleboration, QHarmony said its definite goodbye to Maron Teerds, of course wholly in style, in musical café Dollars in Nijmegen.
Maron studied trombone and conducting at the North-Dutch Conservatory of Groningen. From this period on he has been conductor/musical leader for several wind and brass orchestras, a wind ensemble and a few musical productions. Besides his conducting work Maron is active as trombone player. He has played with several professional symphonic, wind and musical orchestras. For his various orchestras he writes arrangements of popular and classical pieces. He has done sound control for several orchestral and musical productions. Besides this Maron has been active in organizational aspects: he has worked as manager and production leader for professional orchestras and the Conservatory of Rotterdam.